What Will I Do With All This Ouzo & Pineapple Juice?

The Dolofonos is good.  It is also good with sour cream n onion rings. (Alarmingly this snack, at least the store brand version,  contains silicon dioxide. I know why it's in there but it's still disconcerting to eat glass). No matter how good it is though it will take a tremendous amount of time to use a bottle of Ouzo at a rate of 3 dashes per drink. So what else can I do? Even trading the Dolofonos for the Greek Buck won't really get the ouzo flowing.  Maybe I should just accept that it will gather dust most of the time and occasionally see the light of day, maybe not though... This was an interesting drink but frankly I'd rather have a White Heather to utilise pineapple juice.  It does however also solve the quandary of what to do with that bottle of Blue Curacao and it uses more pineapple juice than most drinks.  Oddly the recipe calls for a 7 oz hurricane glass. I'm not sure such an animal exists around here, most are about twice that size.  I used a nosing glass instead.

Cheers!
Posted by Dagreb at 4:25 PM 2 comments: Links to this post

Top Five Things To Do With Bad Scotch

Some people will tell you there's no such thing as bad liquor, but if you don't like one it might as well be bad.  When it comes to artistic endeavours I'm of a different mind,  but I've got some Scotch that I don't care for.  It's been kicking around for a while actually.  A recent tasting revealed that it isn't as bad as I remembered.  Either my palate has changed or bottle aging has improved things.  Maybe a little of both.  More likely the former.  Anyway, if you've got scotch you don't like what should you do with it?

5) Suffer.  Just drink it anyway.  That bottle will be empty, eventually.
4) Let it gather dust.  Put it back in the far reaches of the 2nd tier liquor cabinet.  Who knows, it might improve, or evaporate.
3) Give it away.  Preferably to someone you don't really like that much. I don't think I need to explain this further.
2) Mix it in a cocktail.  I'm sure we've all had so-so drinks made from liquor we enjoy on it's own.  Sometimes the reverse is true, a banal spirit can be elevated with the right partner(s).
1) Make a liqueur! Once made it can be used to make cocktails, cocktails with ingredients you actually like.  Excellent!

So, after making vermouth I still had several fresh herbs courtesy of the seester-in-law.  Still lurking in the liquor cabinet was that bottle of Scotch.  I decided to combine the two and add honey.  You will find a wide variety of proportions and herbs if you search online for "Drambuie recipe" or "homemade Drambuie" or "make your own Drambuie" but the constant things are Scotch, herbs, honey.  Here is my recipe: I can't say for sure how close this is to tasting like the real thing.  I've no reference bottle in the house.  From what I recall though this is quite close.  Or as my father might say, "As near as makes no nevermind." There will likely be some sediment.  I don't mind this.  If you do, well, use someone else's recipe ;-)

No, not Nietzche spirits.  Niche. It's Mixology Monday time again!


So, imagine this.  After a visit home to see the family your Greek friend brings you some Metaxa and some Ouzo.  The Metaxa you have occasionally after dinner as if it were brandy.  The Ouzo you don't know what to do with.  So it goes.  And it goes for a while.  Then you inherit some Sambuca.  It begins to gather dust right beside the Ouzo.  And so it goes.  In the meantime several bottles of gin and rum revolve through your liquor cabinet.  The Ouzo and Sambuca continue to gather dust.  Then one day you find yourself with pineapple juice and club soda in danger of going flat.  Whilst perusing a cocktail book you come across the Assassino.  Before you make it though you discover the theme of the current month's MxMo, hosted by Adventures In Cocktails, to be Niche Spirits. You get the bright idea to make an Algonquin but with Metaxa substituted for the rye.  You figure the spiciness and wood of Metaxa 7 Star will be a nice stand-in for rye.  You're wrong!  Instead the vermouth and juice somehow cover up everything but the jamminess of the grape spirit.  Not what you had in mind.  It's a shame because you even had a clever name for this new drink.  Algonquin makes you think of the wilderness (because of Algonquin Provincial Park) and outdoorsy activities (not hotels or literary clubs). That same Greek friend of the family once went on a canoe trip with your brother. A canoe trip near Lion's Head.  It turned into a harrowing adventure.  In the end everyone was okay, but it was dicey for a while....
Unfortunately the Harrowing Canoe Trip cocktail is not something you want to have again.  Perhaps with 5 Star it would be better.  Perhaps with less sweet juice it would be better. If you ever dare to have it again you'll find out.  So your mind returns to the Assassino. Would you drink something called a Greek Assassin? Maybe.  There's really only one way to find out.  While It's name doesn't have quite the inscrutable ring to it that you were hoping for a tall drink may be the way to go. There isn't really a (personal) story you can tell about an assasin and-
Forget about the name, is there going to be an actual drink recipe anytime soon?  Some of us are getting thirsty!

Shake Metaxa vermouth and juice with ice.  Strain in a Collins glass over ice.  Top with club soda.  Add dashes of ouzo on top of drink. Garnish with a speared cherry. Cheers!
† While the Assassino calls for only 1oz of soda I found this inadequate for the chosen glassware, even after the displacement caused by ice.  I chose slightly more dilution for a better photo.
Posted by Dagreb at 3:52 PM No comments: Links to this post

Last weeks TDN theme was tall drinks.  So rather than the newfangled Old Fashioned I was about to have I made a tall drink. The club soda was all gone but there was chinotto in the fridge. It occurred to me that Campari and Chinotto share some similarity flavour wise so I started to experiment.  This was the result:
Ginottod
1.5 oz gin
3 drops Pernod†
Fill highball glass with ice and chinotto.  Float gin and Pernod.  Garnish with lime (or a lime creature). So, it's like a fizzy Negroni with Pernod subbed for vermouth.  Or something like that.  The original name was a portmanteau courtesy of Cutes: Ginotto.  I added a silent "d" for the Pernod.
This drink will appear (sometime) on the Mixoloseum blog.  Even if Frederic takes matters into his own hands...
Cheers!
†I actually subbed for the Pernod, but we'll just keep that to ourselves.

Posted by Dagreb at 7:01 PM 2 comments: Links to this post

The other night, the above is what the missus said to me.  It was true.  I'd had a Coronado Luau Special and some Onion Rings N' Ketchup flavour Doritos.  Yes Doug, onions.
So, about the drink....
I have enjoyed this drink since the first one I made last summer using Rick's recipe.  This time though, some substitutions were required.  (It is a sweet drink so I wonder if further subs tweaking might be needed... Though it might be a "whole 'nother" drink by then.)
Anyway, much like Keiths Nui Nui post I will now post about a drink already covered elsewhere.
Coronado Luau Special Type Beverage
4 oz orange juice
4 oz sweet & sour
0.25 oz orgeat
1.5 oz Lamb's Navy Rum
1.5 oz Trader Vic's Silver Rum
0.5 oz triple sec
0.5 oz Metaxa 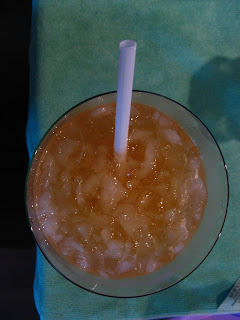 This is meant to be a blended with crushed ice. Even though there is juice and syrup I stirred and then poured over crushed ice.  I was planning to shake but chose a shaker that was too small for the job.  So stirring it was.   I think the funk and sulfur of Havana Club might be a good way to cut the sweetness...
Cheers!
Posted by Dagreb at 6:39 PM No comments: Links to this post

That's Not A Mai Tai

The Mai Tai (like the Tom Collins) is another of those drinks that everyone knows.  At least, everyone thinks they know...

If you know then keep reading.  If you don't know please follow some or all of these links to get up to speed.  I'll wait here.  You're impatient?  Okay, read this one: http://beachbumberry.com/how-to-make-a-mai-tai/

There are likely more resources but that ought to cover it.  You read them all right?  If ever you hear me speak of a Mai Tai I mean the Bergeron Mai Tai.

Now that that's out of the way here's where this is all going.  Most encounters with a Mai Tai will be a different drink calling itself a Mai Tai.  This is what the bar down the street from me serves.  It may be a tasty drink (never had it) but I'd be inclined to actually order it if they gave it it's own name.  I don't recall all the ingredients but a Mai Tai it is not.  Just like that bar most cocktail books have recipes that call for grenadine or pineapple juice or other things that don't belong.  The disparity between all the Mai Tai recipes in my library caused quite a bit of confusion for quite some time, especially when one books Mai Tai sounded nearly like another books Zombie.  (If you think I'm going to open that can of worms, I'm not)

So along with my other books i had written off  The Complete Bartender as a source for a Mai Tai.  Then I actually went back to it and looked at the recipe within.... So why have I posted a bastardized Mai Tai?  Because I want to know the source material.  There are some classic cocktails in the book (and some victims of 1990 also) but the fact that the Aviation contains apricot brandy leads one toward Trader Vic (or Patrick Duffy).  Read this: http://savoystomp.com/2008/09/06/corpse-reviver-re-revisited/  then report back.  If the Aviation is might be from Trader Vic why does the Mai Tai recipe contain light rum, and one ounce at that?

Has anyone else encountered this Pseudo Mai Tai?
Any idea where it came from?

Cheers!
Posted by Dagreb at 10:47 PM 2 comments: Links to this post

Watch (in horror) as I poorly make a flip. I didn't have the shaker sealed properly and ended up with rum all over the counter and my hand during the dry shake. I should have transferred everything to a different shaker but I did not. As a result my hesitant shaking with ice(as I attempted to avoid further mess) didn't really do the trick. The drink was tasty though.

This one's for you Erik.


Cheers!
Posted by Dagreb at 11:16 AM No comments: Links to this post