I'll be brief. Once upon a time I presented a recipe for Falernum. Somehow I overlooked the fact that it called for far too much ginger! Anyway, I amended the recipe. Here's what you'll need:

Here's what you do:

Zest the limes. Combine zest with ginger. Toast the cloves and almonds in a dry pan. Combine cloves & almonds with zest & ginger in mason jar. Cover the mixture with rum. Let steep for 24 hrs. Strain through cheesecloth being sure to squeeze to get all the liquid out. Combine flavoured rum with syrup.

Use your falernum in a tasty libation. Such as this one that combines it with the sherry you've got from last month's MxMo and Barbancourt 3 Star. Enjoy!

ps Why make falernum on January 30th?
Because February is Tiki Month!
Posted by Dagreb at 9:21 PM 1 comment:

Well kids, sit back, relax, this is gonna take a while. Why don't you make yourself a drink? Oh, that's what you came here for? Really, here? Well, uh, this can't be your first stop wether you've arrived from the MxMo announcement post or the roundup post. Surely you've fixed a drink (or two) already. At least read a recipe? Make one of those while I explain what's going on.

If you haven't arrived via the MxMo posts and you're new here (increasingly statistically unlikely) it goes like this:

Each month a theme is picked. The host announces the theme on his/her blog. We all write our own post and link to our posts in the comments of the announcement post. The "event" happens on a Monday. On a Tuesday (or later) the host will compile all our pretty pictures and link back to or blogs. Got it? No? I'll go on. The Mixology Monday website itself is really a calendar of upcoming events and an index of past ones The "party" doesn't actually happen there.

So, my first thought was to use sherry. There's a sherry cocktail coming down the pipe (puntastic!) on this blog but that's for another day. Since I was buying sherry anyway I figured why not?

I don't think I've ever made a Port cocktail and the only one that really tempted me was the Tempter Cocktail but you'll need to find that recipe on your own. So, back to Sherry. The Bamboo first came to mind as a good choice. The version I'm familiar with calls for equal portions dry vermouth and dry sherry and a dash of orange bitters; Nothing more.

Second I thought of the Brazil. Using the version from American Bar wherein Herr Schumann eschews the bitters and the twist I thought I was all set. Then something happened while I was drinking the Brazil. A discussion on Twitter turned to talk of olives (and other things but that matters not).

"Olives," I thought I myself, "A tasty snack that would make."

So this was going to be my MxMo drink:

Stir with ice and strain in to a cocktail glass. Garnish with an olive.

No, really, an olive!

While I was searching databases and my library it occurred to me that many Sherry cocktails are quite old recipes. Nothing wrong with that per se but what of newer creations? I consulted the index of F&W Cocktails 2012 and the first drink under the Sherry heading caught my eye. This drink had then been on my mind since, well, since I started contemplating what to present for this MxMo. After the olive garnished Bamboo - not immediately after, mind you, as there may have been a meal in between - I decide to give this other drink a try. This modern cocktail called for white rum and all the white rums I had on hand were (and still are) over proof. This wouodn't do. I decided instead to use an "80 proof" (pardon my Americanism) Jamaican rum. That rum was Blackwell.

If you are familiar with Blackwell rum you know it is far from a white rum. But what the Hell? I used El Dorado EHP when I made the Iron Mine! Both these drinks are creations of Leo Robitschek. The Iron mine being the "twist" and the Heart Of Stone Daiquiri being the "reinvention" of the "classic" Daiquiri. (Food & Wine Cocktails 2012 follows this variations on a theme format throughout. Some drinks also get a "mocktail" variation). Both of these variations are quite tasty. The Heart Of Stone being tasty enough to make me reconsider my choice for the MxMo. Did I say that already? Well here, with my bottle choices in parenthesis, it is:

Delicious! It tastes at once of tradition and of modernity. I figured I was all set. I even instagrammed my drink. About this same time aphonik did the same thing with the all too similar Flor de Jerez. The Flor de Jerez is a Joaquin Simo drink that came to aphonik's attention via Camper English and Gaz Regan. I decided I must try this newly know drink... for comparison purposes! Besides, I had half a lemon still on my cutting board just waiting... The lemon might go bad, right? Best to juice it now!

So, I made the Flor de Jerez. It too is a tasty drink. A nuttier, drier, closer-to-a-fancy-sour drink. The El Mariachi to the Heart Of Stone's Desperado or something like that. Again I took some liberties with the ingredients. On comparison night I used the Appleton Reserve as called for but tonight I couldn't resist putting Flor de Cana Centenario in the Flor de Jerez. It makes the drink sweeter and smoother and perhaps a little too easy to drink. Either that or there is a tremendous disparity in the sweet to sour balance of the lemons I bought! Stick with Appleton.

As I mentioned this drink is drier than the Heart Of Stone. It is drier and nuttier and tastes less of candied fruit. This is neither good nor bad just something to keep in mind as per your current state of mind and your palate.

So there you have it kids: A fancy sour, a modern cocktail, and an old-school-bizarro-garnish cocktail. I've still got half a bottle of amontillado to go! 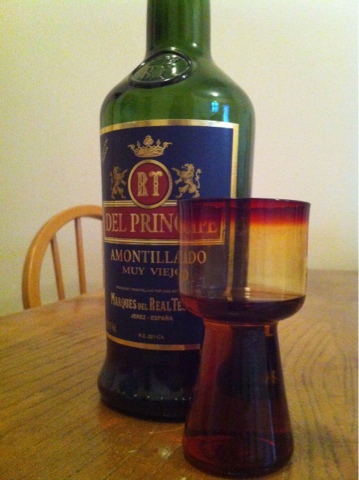 Posted by Dagreb at 6:32 PM No comments:

I may have deleted actual comments in my flurry of deleting Russian spam. We'll see if anyone re-comments...

Posted by Dagreb at 9:11 PM No comments:

Chapter 5: Revenge Of The Giant Head

Last night I watched Inglourious Basterds. I hadn't seen it before and it turns out there's more to it than you might think. As I was watching it I wondered if it's more enjoyable if one speaks German and/or French in addition to English. I guess I'll never really know...

Immediately afterward my thoughts went to what a challenge it must be for an actor to portray Hitler or Goebbels and I briefly thought of the film Max. Today, though, I find I am thinking about film in a way I haven't for quite a while. I've thought about a movie the day after seeing it. Lately it's been of the type of "wasn't that funny" or "that scene was cool" or "that was unrealistic." Today is different. Today I'm thinking not about what was cool or gory or implausible. Today I'm thinking about subtext and acting and framing a shot and foreshadowing and a glass of milk and so on and so on.

So, thank you Mr Tarantino. It's a good start to the year for my, uh, intellect.

ps I am still a booze blogger and booze hound after all. The paint on brick advert for Byrrh did not go unnoticed. Neither did the Picon sign in the tavern or that delicious looking old bottle of Chartreuse ...
Posted by Dagreb at 6:13 PM No comments: