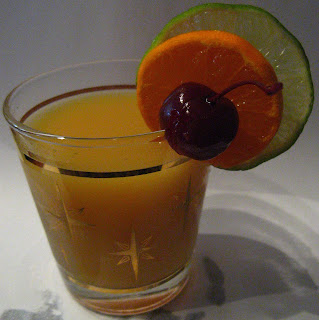 "Love the one you're with!"

Apologies to Stephen Stills and Billy Preston. Now that that's out of the way...

When I began my journey through the world of booze-blogs all I wanted was one thing: A definitive Mai Tai recipe and a definitive Zombie recipe. Okay, that's two things. The Mai Tai thing was easy enough to sort out, orgeat on the other hand...

The Zombie, of course, is anything but definitive. Though this simplified Zombie might not be such a bad idea...

What is a bad idea is pining away for exotic liqueurs and impossible to find rums whilst neglecting what's actually in your liquor cabinet. While reading about other peoples booze was quite entertaining and often full of pretty pictures it mostly made me feel left out.  Brands I have previously only read about have started appearing on shelves here but there's always something (or several things) out of reach.  What's a fella to do? I'll tell you...

Search for recipes containing bottles you actually have or use your knowledge of flavours to make something tasty. It's that simple. Though sometimes we all could use a little coaxing. The last TDN of March and the first blogged about in April was Dry Vermouth, "You know it. You have some, Now use it!.." I, for one, have no trouble using my dry vermouth.  This is mostly because I don't have other aromatized wines on hand. That and the fact that I really enjoy it.  What I do have trouble using is my coffee liqueur, and my maple liqueur, etc. I had been looking for things to do with Falernum and to a lesser entext Pimento Dram.The first drink of the night, the Samuel Lord (which Fred has left out of the blog), contained both! Excellent. It also combined rum and dry vermouth which puts me in mind if the Sloppy Joe though it may put you in mind of El Presidente. The name may be a play on the Port Antonio, which I doubt, but I expect the intent is to use Bajan rum. Having earlier in the week found a use for Falernum in a variation of the Eye-Opener (or so I thought) that actually was a variation of the Eye Opener by way of a Vampyre the Samuel Lord seemed like another excellent use for Falernum and an excellent way to use up my dry vermouth.

Where was I? Oh, okay, I was now within reach of some rum(s) which had not previouly been available here but had no room in the liqour cabinet. So, to empty some bottles,  instead of the Mai Tai I was craving I had...something. This got me thinking about Dr Adam's recent post about the Negroni and his tweets about etymology. What I ended up having was a Pinky Gonzalez, mostly. I omitted the sugar syrup (a la Dr Bamboo) and added a float of cask strength Laphroaig to the lime. So I present to you: You know how to make this.