Once upon a time, on a cool snowy day, as i made my way to my basement apartment from the college i noticed those ahead of me crossing the street. There appeared to be no reson for this behaviour. No reasnon until i saw the Mormons. Everyone ahead of me was avoiding the Mormons. I did not. Not that i really wanted to stop and talk, to anyone. It was just that by the time i realized what was happening it waould have been very obvious had i also crossed the street. Obvious and rude and ridiculous. Anyway, i stopped and chatted with the two Elders. They wanted to come with me and talk some more. I said they could but it would have to coincide with me making my dinner. They declined to come to my apartment, they did take my name and number and said we would continue our conversation. I waited. They never called. Ever. Bah! Nuts to you Mormons! you had your chance and you blew it.

Yesterday, there came a knock at the door. Or possibly a rining of the doorbell. It doesn't matter. Two women were at the door. Jehovah's Witnesses. Only one did any talking. I was given an invitation to the Anniversary of Jesus' Death (a.k.a. Easter) and a copy of Awake! (Seriously, the "!" is part of the title) to read. They claim they will return to hear my thoughts. i doubt it. The only person who has ever come back to my front door was someone trying to rip me off over my gas bill. I live in a high density neighbourhood that is well suited to door-to-dooring. I will be overlooked.

Back to the once upon a time. I recall wishing for an encounter with the Jehovah's Witnesses, so that i could give them the Mormon's number as my own. Or something like that. It was many years ago and i was young and angry. Oh well, the only thing i've ever bought door-to-door was a bag of oranges. I don't think i'll be buying religion. :)
Posted by Dagreb at 3:26 PM 1 comment:

I am currently intrigued by symbology. I don't know why. Maybe it's my lack of active religioning, maybe it's my feeling that words are often inadequate, maybe it's my desire for a tatto without a concrete idea of what it should be. I don't know. Anyway, one symbol i'm a big fan of is the ouroborus, the serpent eating it's tale (oops, tail). Unrelatedly, or so i thought, i have always been fascinated by the Moebius strip. Wasn't i pleasantly surprised to find a combination of the two. A serpent eating it's tail in the form of a figure eight, or infinity, or........THE MOEBIUS STRIP! Fantastic. Quite literally. The Ouroborus lemniscate. Ahhh.... The lemniscate itself is also interesting and infinite. Hmmm... It seems that many symbols, especially those turned into jewelry or tattoos, mean the same or similar things. Interesting.... Redundant? Not really. A reflexion of the many facets of humanity perhaps. We all find ways of being nearly the same. In very different ways. Go figure. ;)
Posted by Dagreb at 7:14 PM No comments: 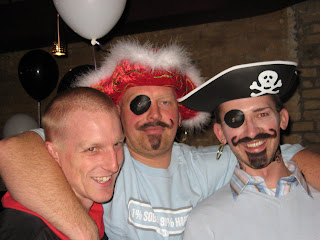 So, I recently went to a theme birthday party. This past Saturday actually. That's right, coinciding with St Patrick's Day. The theme was Pirates! It was a party for an adult. Or possibly an "adult." Depends on your point of view, i suppose. Anyway, 20+ people out at the bar dressed like pirates. Arrrrrr! I was going to make my whole costume but i did purchase some toys as accesories. A hook, a sword, an eyepatch, you get the idea. The toys make noise. Activated by a button on the hilt the sword makes clangy swashbuckly noises. The pistol makes pistolly noises. The hook, however, may be broken. It spontaneously makes clangy noises. The button does nothing. Remember this fact.

After sorting out my costume Friday night and Staurday morning i anxiously awaited the party. My chauffeur arrived and off we went. My bag of "weapons" at my feet. We discussed our respective costumes and who would or would not be attending. It occured to me that though fanciful and unrealistic my "weapons" may be frowned upon. We discussed this. One never knows what will be confiscated by a doorman at a bar. Anyway, immediately after i said "I hope my 'weapons' don't get taken away," from the bag came crash, clang, schink! Hilarious! Luckily my driver is skilled at busting a gut while driving. Maybe you had to be there. Maybe not. The fake-noise-making-hook was the highlight of "before the party". I did not get to experience "after the party" but that's just as well. The party itself was a blast. A ridiculous attention getting who-the-hell-are-those-pirates blast.
Posted by Dagreb at 7:41 PM No comments:

So, on our latest sushi adventure we ordered our largest number yet of hand rolls. As i was enjoying one of them i was imagining taking some to a picnic, or a hockey game! It seems like it could go anywhere. I think the hand roll may be the world's most perfect food. I knwo some give that honour to the banana. I don't see much difference 'tween the banana and the apple in terms of portability and ready-to-eat-ness. True, fuit does not require preperation, however once prepared the hand roll is highly portable. And tasty too! Kind of like a seafood icecream cone, without the drips. Most excellent. As i may have stated earlier the handroll does not require bites of a specific size. One can take as much or as little as desired in a bite. Also excellent. Because of the seaweed "cone" there is much less chance for mess when compared to maki. Especially excellent for messy me. Hooray for the handroll! Boo for all the other crap that's been going on. We don't need to discuss any of that right now though.

I don't think i look like any of these guys. Get one for yourself.Or not. 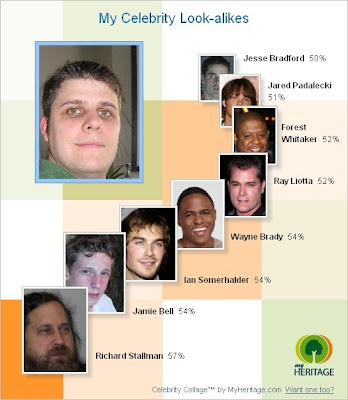 Okay, two black guys? Really? I look like Wayne Brady AND Forest Whitaker? I don't think so. I'm pale, and NOT smiling. I barely even look like Ray Liotta. With another photo I supposedly looked like Magic Johnson! Seriously. Still not black, still not smiling. Oh well, whatever. Maybe it's the dark circles under the eyes, i don't know. Maybe I need a better photo. Maybe it doesn't matter. It is amusing though. BTW the Magic Johnson photo also matched with Jack Kerouac, George Clooney, Mikhail Baryshnikov, and Bob Dylan. Y'know, they all look the same. ;)
Posted by Dagreb at 8:30 PM No comments: