It's MxMo time again and I can't be bothered with much of a preamble or much prose of any kind. Our host is Putney Farm. The theme is Inverted. I'm giving you two drinks. Here they are: 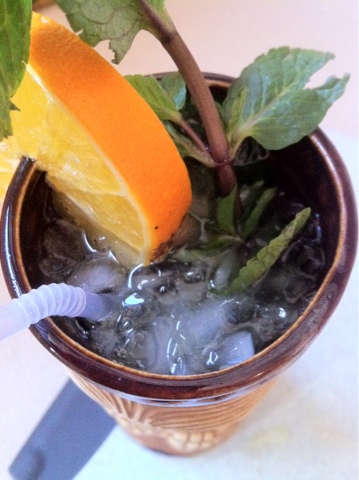 Stir first four ingredients over cracked ice in a highball lass. Top with soda. Garnish with a silver spoon (not pictured).

Speaking of Angostura bitters, as I was finalizing my research I received a special request from DJ Hawaiian Shirt to revamp my Angostura OF. So if the tall sweet one doesn't appeal try this shirt bitter bevvie:

Stir over cracked ice in a DOF (see what I did there?) Garnish with a dash of orange bitters and a rock candy swizzle.

Posted by Dagreb at 5:06 PM 2 comments: Links to this post

Some friends text you and keep you constantly up to date. Other friends you meet for a pint or a coffee and you catch up with stories of the past week or month or what have you. In the Cocktail Blogosphere Fred at Cocktail Virgin Slut is the latter. Instead of the immediacy found in Instagram and twitter Fred tells us what he drank... last week. In this vein I will tell you of what I drank several Thursdays ago...

I was looking for an after dinner cocktail. I chose the Hair Of The Lion. I had all the needed ingredients and having previously not really enjoyed the Lion's Tail I was curious to see how much improved the rum for bourbon swap made the drink. I was not disappointed. Well, not in this regard. I was let down in my desire for a dessert drink. Tasty as the Hair Of The Lion was is was too light and frothy for what I was looking for. Maybe something with an egg yolk? (There was of course an egg yolk waiting patiently in the kitchen.)

I quickly searched CVS and found a drink I'd noted either mentally or browserly (I'm unsure which) when Fred first posted it and I'd been meaning to make it. Did I have all the ingredients to make a Suhm Heering Float?

So basically I turned a float into a flip. Like so:

This is a very rich drink. Definitely a dessert cocktail. Old Monk always makes me think of rum balls and I don't know why that is. The sense memory of rum balls added to the chocolate and the cherry along with the unctuous quality of the egg yolk make for a decadent drink. You can't have too many of these nor can you have them too often. When you do have them though, that's livin! 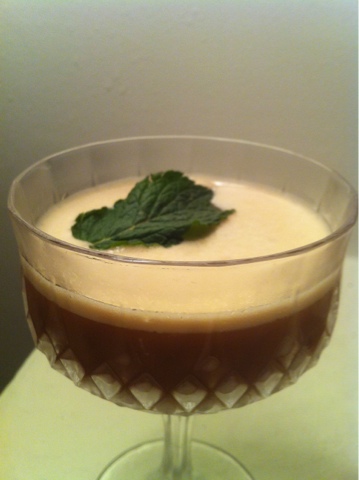 Posted by Dagreb at 2:11 PM No comments: Links to this post

Two Thursdays ago it was Brandy Alexandr Day. Really. Everyday is something these days. Lots of them are beverage related. For Brandy Alexander Day, Muse Of Doom of Feu de Vie posted a recipe for the Rotorblade. It intrigued me but I was missing two key components. Mainly the brandy and the Alexander. As I nearly never have milk or cream on hand I considered making the drink with an egg white. The eggs I've being getting of late have had whites of approximately 1 oz so I figured a straight swap for the cream would do. Alas I had no cachaça. I do however have El Salvadorian (unaged) cane spirit called Tic Táck. Yes, that'll do.

So this is what I made: 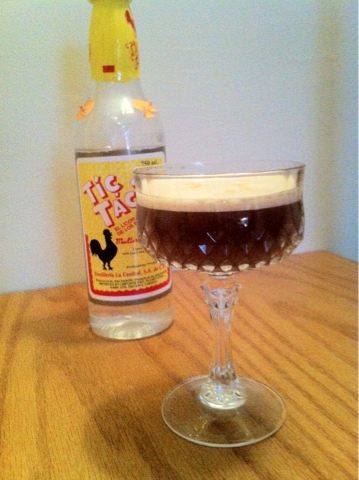 Posted by Dagreb at 4:04 PM No comments: Links to this post