It's a leap year.  Some time ago (possibly last year when 12 Bottle first posted it) I made a mental note that I should have a Leap Year cocktail the next occurring leap year. I didn't think much more of it until this month.  Like most of us I was caught up in Tiki Month and didn't think of the Leap Year until this week (more or less). So, I consulted Schumann's American Bar and OhGosh! and discovered that i did not have all the needed ingredients. Egads!

How could this have happened? It doesn't matter...

Anyway, to be thorough i checked another source and saw that this cocktail was listed as the variation and the original contained (of all things) Orange Gin! Something I've never had on hand. Okay...

So there i was without Grand Marnier, without regular gin (so sue me) but with a lemon.  A lemon and triple sec and aged gin. I figured that the aged gin would nicely take the place of the woody component of the Grand Marnier and we'd have a nice approximation.  An  approximation but really another variation. Or maybe a (syrup-less) Fancy Aged Gin Sour. Hmmm, maybe not.

This got me thinking about cocktail variations and when something merely needs variation added to the end of it and when it needs a new name. Of course this brought to mind the DJ and his remixes. Remix standing in as a synonym for variation is good and all but the music metaphor only goes so far. I had planned to go on about this for a good portion of the post and recommend that everyone read This Is Your Brain On Music. Then go an a little more and kidnap Doug and have him point out that if your booze-blog contains this much prose before a drink recipe there`d better be a picture of "cheesecake" to hold the readers interest.

I think you just did that.


So, why am I telling you about what I was going to do rather than just doing it? Because of this repost:

This recipe says orange liqueur, not Grand Marnier. D'oh! So, I did have the ingredients! Just not the proper gin.

So, somewhat sheepishly, here it is: 
Shake together over ice, strain, serve in a cocktail glass. Or, if you have one, in a Klein Cockail Glass.

Cheers!
Posted by Dagreb at 8:00 PM No comments: Links to this post What is Mixology Monday, you ask? It's the monthly online cocktail party. What would a cocktail party be without food?  Well, it would just be a bunch of people getting drunk wouldn't it?  Despite my agreement with Joe's recent comment that all the tiki drinking should be offset by tiki eating I will leave the food recipes to other blogger(s) and offer you some beverages for the drivers and tee-totallers. You only invited drinkers you say? Just like the unfortunate appearance of douchebag Steve the people you invite and the people who show up are not always the same. So you must offer (along with food) some low or non-alcholoic drinks for your guests.  John and Marsha drove to your party and they're going to drive home too*. So, whoever loses (or maybe wins) at Rochambeau must remain sober. You could be predictable and offer pop soda or (plain old) coffee but in the spirit of a Tiki party why not make everything out of hard to find ingredients? Here we go:


Brew coffee in a Moka pot. If you have a more Episcopalian less Italian coffee maker use twice the amount of grounds you normally would. Stir in Zuko powder. Garnish (you heard me!) with a pineapple chunk.  Encourage your guest(s) to add the pineapple to the coffee. 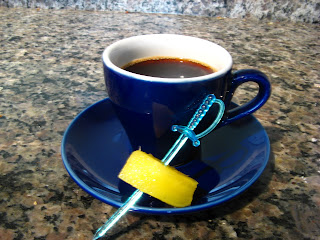 If you do add the pineapple to the cup the result is a flavour combination favoured by both Tiare and Col Tiki.   Two wonderful folks for whom Tiki month happens all year and if they like those flavours, well...

For the following drink use a non-alcoholic falernum.  Say, like this one from Rick.


Build as an egg cream in an ice cold glass.


There you have it folks. Two tiki-flavoured drinks for the non-drinkers at your party.

Some music for your party. It is a party after all, get up and dance. None of this relaxing sounds of Martin Denny nonsense.


*John and Marsha live in a subdivision a) not serviced by the bus and b) full of convoluted streets. That makes directing a taxi driver an exasperating task when sober, let alone when coming home from a Tiki party.
Posted by Dagreb at 4:44 PM 1 comment: Links to this post

Perhaps it should be red powdered beverages. I'm not sure...


Hot
Anyway, I had a canister of Gatorade powder. I brought it to work to replenish myself after my lunchtime "workout."  One of my co-workers had brought hot chocolate mix.  We noticed the ease with with hot chocolate dissolves in hot water and the lack of ease with which the Gatorade powder dissolved in cold water.  So, in Julian Smith fashion (and mostly as a joke) we made some Hot Gatorade figuring that the powder would dissolve very easily. It turned out to be rather tasty too.  Who knew?


Cold
Whilst grocery shopping we (the missus and I) encountered Zuko Jamaica flavor drink mix.  Already familiar with Jarritos Jamaica soda (and armed with the knowledge that allspice is also called piment de la Jamaïque) I was expecting a clove-nutmeg-cinnamon drink. I was not expecting fruit punch. But there it was. Cloves and fruit punch. Wha!? Further research revealed that it is actually hibiscus (or flor de Jamiaca) flavoured.  So too, allegedly, is the Jarritos drink. I'll need to sample that again and report back...


Hmmm, what will I do with this fantastic flavour from the Caribbean?


Watch out!
Posted by Dagreb at 3:44 PM No comments: Links to this post Posted by Dagreb at 8:55 PM No comments: Links to this post

Doug and the MxMo

I've participated in the past in the monthly cocktail party that is Mixology Monday.  I've missed the last few several but spurred on by Doug's enthusiasm and prolific posting for Tiki Month I feel I must participate once again.

Hey, why don't you participate too?

Stay tuned!
Posted by Dagreb at 8:36 PM No comments: Links to this post

I think I might just have something brewing. (Not actually brewing, mind you, but figuratively)  It`s tough to booze-blog when one is not consuming booze.  It is extremely academic and existential though.... Anyway, with the upcoming MxMo and Doug`s suggestion that Tiki posts not be limited to drink recipes I think I may have something here....
Posted by Dagreb at 8:15 PM 1 comment: Links to this post