It's March. How do we follow the awesomeness that is Tiki Month 2013? However we please. Doug simplifies with Old Fashioneds and the like. Everyone else? Wait and see I suppose...

I've come up with a project for March. Rather than tell you outright what it is I'm going to see how long I can obfuscate what the, uh, "theme" actually is.

If you think you've got it please comment! I will for my part walk the line between obvious and obscure when it comes to clues. Anyway, as it is March 4th I will take a drink already renamed for the purpose of confusion and rename it again.

This drink may have come from a book by Charles H. Baker and it came to my attention from somewhere else. That somewhere else is my theme for the month. I used Rittenhouse Rye. The original recipe calls for Pernod but I used Ricard because I am a contrarian that's what I have. I used Martini & Rossi Vermouth and I used Fee Bros. Bitters (even though potentially better quality bitters are available).

The pastis comes through first to
me followed by the rye. The bitters make vague suggestions later on. Strangely the vermouth is almost undetectable to me; Usually Martini & Rossi is a force to contend with. Perhaps I should investigate this phenomenon with some rye Manhattans? We'll see.... 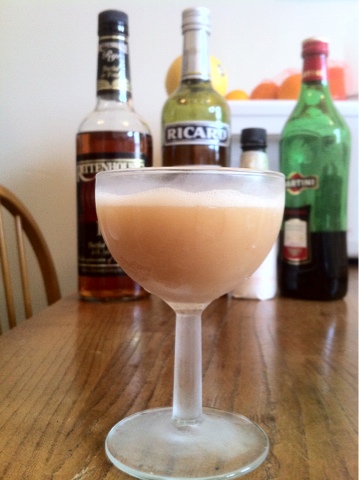 Now that I have my head straight again:

An uncanny resemblance isn't it?