I made fassionola and you can too! Read through the Atomic Grog, you'll figure it out! I was going to present to you the Cobra's Fang or a reasonable facsimile but I think Kevin, Fred, and Andrea have that covered. Covered quite well. Besides, who would want to drink a Massasauga Rattlesnake? Instead lets take a drink many know and love (and which may be an excellent prototype with which to introduce friends to tiki) and put it through the ringer!

Served in a Polynesian Palace Don Ho glass we serve a tribute (#bastardizen?) to Hurricane Hayward's tribute to the Mai Kai's... 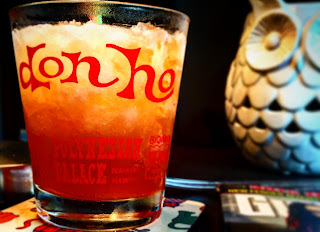 Combine first nine ingredients with ice and blend until tiki-frothy. Pour into a DOF. Add more ice as you see fit. Float overproof rum on top.*

Come at me sideways rude boy!