Some time ago I received a bottle of aged apple gin. How it got here doesn't matter. Fuhgettaboutit. Anyway, besides the White Heather and the Leap Year back in February (as if you somehow don't know when Leap Day is... sheesh) I've not been sure what to do with it. So like any good booze-nick after checking my library and coming up with nothing I went to the COCKTAIL DATABASE! There are 3 recipes using apple gin. Three. One in particular caught my attention because of it's likelihood to allow me to finish some bottles that, honestly, have outworn their welcome (cough, -cough- Bols Blue). The recipe in question is the Ivy. I figured that the aged apple gin/triple sec combo would reasonably sub for apple gin & Grand Marnier. As it is I expect that the drink is far less blue when made "according to Hoyle."  Anyway this is a tasty one, I feared that 6 ingredients might make for a muddled drinks but in this case it all works nicely together. Unless you want to make a really big drink though it means for lots of fiddly measuring. All in the name of science blue drinks! 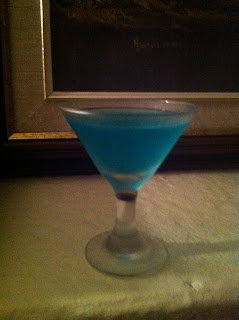 This recipe, the Cocktaildb tells us, was invented by T.E. Pooley. I don't know who that is. Oh well.

Jesus, did I send you that much gin??

Honestly, I'm irritated with how many cocktails blend apple products with orange products. I don't want to get crazy and superstitious with "apples and oranges" phrases, but I just feel the two don't go very well together.

More goodies will be in the mail to you soon. I'll email you.