Recently(ish) a bottle of rum cream came into my possession.  Straight from Jamaica even! The label proclaims it's made with genuine overproof white rum yet for some reason the product is brown. Hmmm. White rum + cream (assumedly white) = cafe au lait coloured product. What's that all about? Some sort of secret process by which alcohol is emulsified with cream (and stable at room temp and not requiring refrigeration) also necessitates added colour? Maybe. I'm not a food scientist. I'm not any kind of scientist for that matter.

Unlike some other products I've had that taste vaguely of alcohol and mostly of cream this is definitely made with rum. Even at 15% abv anyone else (with working olfactory senses) in the room you're in will know you're drinking rum!

So, when next someone you know goes to Jamaica and asks what (legal things) you'd like brought back as a souvenir you could do worse than to ask for Wray & Nephew Rum Cream. 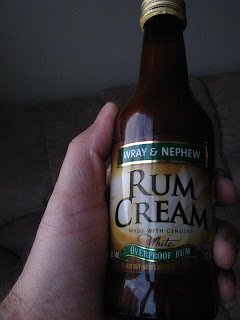 Labels: rum, that's not a

the taste is so smooth you just sip slide