Fizz? Or Is That A Buck?

As I mentioned, I was afraid that my best wouldn't do. Then I realised that what I consider a non-alcoholic drink is in fact a highball. A highball I make and tweak often. There's alcohol in them thar bitters!

Anyway, the drink first. The story second. Actually something else first.

(I thought first of some other drinks but I haven't perfected the Whatnot tincture so it isn't fair to expect others to make a Rum Whatnot. And my New Year's drink was really just a modified Scorpion...)

Method:
Combine juice, orzata, celery bitters, and 8-10 dashes of Ango over ice in a shaker. Shake to shuffle time (swinging 12/8). Meanwhile fill a highball glass with ice. Cover the ice in the glass with 3-4 dashes of Angostura. Strain the mixture into the highball. Top with ginger beer. Add 2-3 more dashes of Angostura to colour the fizzy foam. 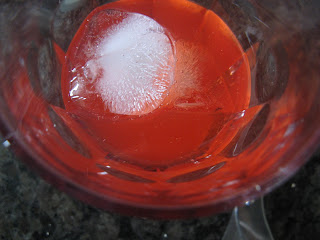 So, depending on how heavy a hand you have that's about 0.50oz to 0.75oz of bitters in your drink. At 45% Alc/Vol. (more or less) that makes this far from a non-alcoholic beverage. Not the booziest of drinks mind you but still a cocktail. Enjoy.

*Go ahead, you can use orgeat instead.
**If you've not got Barrit's you can sub D&G. Failing that 1/2 Barr's and 1/2 Vernors will give you the ginger and the barrel aging tastes.

How did I end up here? It all started with being bloated and uncomfortable. I read somewhere that bitters and soda was good for stomach upset. I gave it a go. It was a success. As time went on I started to enjoy my "medicine" and upped the amount of bitters. It got to the point that my drink was fizzy and very red. Almost like Sorrel Fizz.

At some point I was in need of "medicine" and had no club soda. I used ginger ale instead. I found that I enjoyed this new beverage even more than my old one. In fact I added the Bitters Highball to the house cocktail menu. This enjoyment of Angostura carried over to other cocktails. I found myself using far more dashes than most recipes called for. Sort of like how some people put salt on already salty fare**** I suppose. Bitters are the salt & pepper of cocktails don't you know.

Just like the stomach settler things progressed once there was orgeat orzata in the house. At first the suggested refresher of topping the syrup with soda. Then the soda changed to ginger ale, then to ginger beer. Then I got the bright idea to use lime juice too. At some point the "bitters as seasoning" hypothesis had to be tried and above is the recipe I've arrived at. I think that's it. I may have left something out. I'll let this sit for a day before posting just in case.

I'd be remiss if I didn't include a link to both Mixology Monday and to Spirited Remix. The event and our host. Perhaps that's two things... And another thing. When I searched for Gioia Orzata I got more results for my blog than for anything else. Hmmm....
***Yes, just like the band Therapy? there's a question mark in the name.

****Just like salty food this drink begets another. Leaving you enough ginger beer after two to swirl in the bottom of the glass and drink the remaining syrup and lime.
Posted by Dagreb at 5:19 PM

To be honest, I've had Angostura-heavy ginger beer drinks before, and I've been pleased. I thoroughly look forward to this drink. I also love the story.

I believe I shall finally be moved to pick up some celery bitters on Saturday. I think this MxMo is going to make me get a LOT of new ingredients.

I'll be using all the right ingredients except that I'll have to use the best American ginger beer I can find. Forgive me...

I Just bought some Maine Root Ginger Beer. It adds some vegetal funk and some spice to the drink. A good choice if your limes are a little "green". Know what I mean?