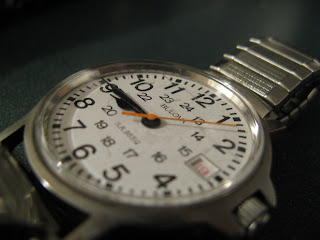 I have a watch that once belonged to my Grandfather. It's not fancy, but my recent photography of it prompted me to do some research. At first i came up with nothing, but i figured it out. From 1960 to 1977 Bulova made a watch called the Railroad. (or the Accutron "railroad approved") Or something like that. These watches came in several configurations, including date, pepetual calendar and even dual hour hands! (The latter for those travelling between time zones on a regular basis). Anyway, in 1989 and continuing through the early 90s Bulova once again made the "railroad." Seems to be only quartz movement this time around, no windup. Still a nice, wellmade watch.

This particular watch was made in 1992 and i believe purchased some time around 1994. I don't know why Grandpa chose this watch. Was it something he recognised that a co-worker had? Did the salesperson play up the railroad angle? I need to find out. I will. I'll keep you posted.

Good question. For so many years he wore a pocket watch. I didn't know you had the wrist watch. I wonder if he bought it from "Jimmy the Jeweler. Would Rita Mooney know? It has a clear face, maybe that appealed.
Rita