A Funny Thing Happened On The Way To Amaro Week

So there I was contented with the drinks I'd used to christen* my new large-ish brandy snifters and about to settle in to Amaro Week when what should I spy but a snifter full of crushed ice! It was the Nine-O-Six made by Jordan of High Proof Preacher. Amaro? Tiki? It's tuesday?! I'm in!

The drink as made called for Mount Gay (for Eclipse pun reasons) and also Kashmiri Amaro. The rum I was confident I could sub** (pun be damned) but the amaro? Hmm...

Cardamom, eh? My most recent batch of Falernum is cardamom forward...

Well, anyway, here's my take in it: 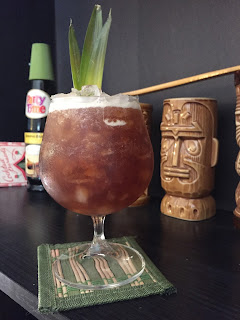 Shake with ice and strain into a brandy snifter filled with crushed ice. Garnish in a mountainous fashion.

*Stay tuned for next week's Tiki Tuesday!
**I used Cockspur