So, it all started because I wanted to comment on my friend's blogs. At the time the options were to leave anonymous comments or to create a Blogger profile (and blog) and be part of the clique. I didn't want to be completely anonymous... The idea of using my real name or posting photos of myself or anyone else weren't things I was comfortable with but I wanted my friends to know it was me. Was had a blog, Close Enuf had a blog, Snosh had a blog. (Still does! It's a "cob web site" but hey!) so Dagreb got a blog too. It began with this post.

There was no real purpose or cohesion at first and really there hasn't ever been. It started to be about sushi, or road construction, or the local hockey team. Eventually it became about booze. Then briefly it was about mental health. So why Dagreb? Why Nihil Utopia?

Some old friends were blogging using their old nicknames so I did the same. Later I used the name dagreb for Flickr and for twitter reasoning that it was unique and wouldn't be already taken and so on and so forth. It was also my belief that the blog didn't actually exist. It isn't tangible. Sure it appears on the screen of whichever device you use to read it but it isn't actually there. I wanted more to the title and I think the original translated to something like "no-one, nothing nowhere" but it came off a little too clunky. You see, Utopia may mean Shangri La but it literally means no place or no where. Cutting the title down to two words also meant there was no imbalance between the Latin and the Greek. Nothing Nowhere. Nihil Utopia.

So here we are ten years later. Now we share and share and share everywhere but in 2006 it was shockingly reckless to use one's real name and real vacation photos and put them out there on a blog for the world to see. Well, I thought it was reckless. I recall the first time my Aunt shared photos from a family event on Flickr and how odd I thought it was. My how things change eh? Maybe a blog is all anyone really needs. Maybe. 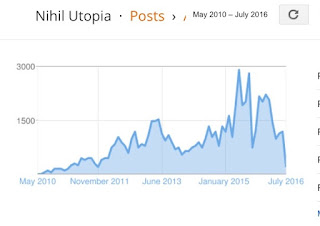 aww! What a wonderful well written origin story. I so agree with you about posting photos of your family for all to see. Still odd to me. Which is why I'm not on Facebook. Well many reasons really. Hahaha