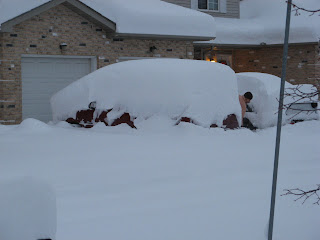 So, we've really been dumped on today. Well, overnight actually. I had every intention of shovelling the driveway and going to work. Then something occurred to me. Even if i got all the snow shovelled i wouldn't be able to go anywhere, the street hadn't been plowed. The street remained unplowed until late this afternoon. One of my co-workers who lives nearby was in a similar predicament. (He called to update me). So we decided to find out what the boss was up to. He was already at work! At least an hour before i start. Just by happenstance his route was driveable. Driveable enough to get there i guess. Ultimatley production was cancalled and we were all to stay home, the boss stayed at the lab to answer the phone. The phone which rang seldomly. Anyway, here's a photo of my neighbour before he backed into the snow and stalled out.
Posted by Dagreb at 5:08 PM