"Is it sweet?" She asked, half watching netflix and half playing on her phone.
"No... it's more sour," said the imbiber.
"You like sour"
"Yes. Yes I do."
For a moment she appeared to ponder whether she herself was sour or sweet.

This month's Mixology Monday theme is Spooky Sips. Chosen by our old pal JFL at Rated R Cocktails. I thought it was gonna be easy! It occured to me that a good place to dig up recipes might be Sloshed! (seemingly now defunct) or perhaps 12 Bottle Bar. So to the interwebz I went. The Vampire just wasn't what I wanted to present to you. The Jack Torrance though grotesque would require buying at least one bottle and perhaps some cookery. That just smacks of effort! So to VS&FC I went wherein I found Satan's Whiskers. I can't recall the last time I made a Satan's Whiskers but I do recall not enjoying it. Last time was curled, this time I went straight. No sir, don't like it. Odd really as it seems like something I would drink. I'm not sure what the problem is. Perhaps it's the Between The Sheets problem....

I decided to go Tiki. A couple of drinks came to mind. Well, maybe more than a couple. I made as near as I could to a Mai Kai Black Magic. What could go wrong? Tiki and the occult. Mysterious sweeteners and unobtainable rum. It should be a slam dunk! Turns out it's just not my bag. Don't get me wrong, it is a good drink. It has many layers and evolves over time, but I'm not dying to have another one.

Back to the drawing board I went. My girlfriend had shared some buzzfeed nonsense recipes. I was doubtful. One did look tasty, essentially a New York Sour with tequila. Not particularly spooky though... The other ghoulish delight called for Absinthe and coconut. This seems to be a common combo for Hallowe'en. I came across a similar recipe seemingly promoted by Lucid. It tasted like an All Sort. A coconut roll to be precise. It did look spooky though...

I was getting concerned that I'd have nothing to offer. In other circumstances I'd say to Hell with it and try again next month. I was loathe to disapoint JFL and not have a submission. To my library and the internet I returned. All things dead, devilish, diabolical, and Hallowe'en related I read about. Mostly I stuck to CVS and Savoy Stomp. I still wasn't convinced I'd found the right thing. A Zombie and all it's iterations seemed too obvious. Making up a drink seemed too exhausting.  I even considered going out and buying a watermelon...

So, there I was without a drink to drink let alone blog about. I decided to return to the Atomic Grog list. There had been that second drink name that popped in my head when I called up the Black Magic recipe. Perhaps it's my Catholic upbringing or perhaps it's my teenage exposure to Skinny Puppy but the name sticks in my mind. I had recently made falernum and also made passion fruit syrup. (For a punch or two) how could I pass this drink by? 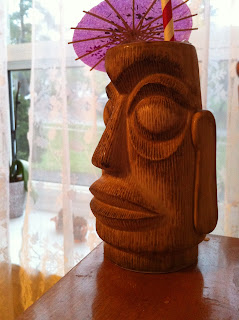 Blend on high for 5-7 seconds. Pour into a chimney glass or tiki mug. Add more crushed ice as needed.

In and of itself there's nothing really spooky about this. It is a sour. As is most Tiki. A sour with a little of this and a little of that. Give it a foreboding name and an ostentatious garnish and voila! (A story about a drink returning from the grave doesn't hurt either!)

Happy Halloween! I love to try this one..thanks for sharing ;)